Villervalla is a company with solid values: joy, optimism, equality, inclusion. Villervalla simply stands on the side of the children and these principles are evident in the colorful and playful garments.

What do we mean when we say “children’s clothing”? It is not just a matter of creating garments smaller than those for adults: behind these words there is a great study of the true essence of children, their creativity and natural desire to live. This is why Villervalla designs and manufactures clothing for children from the newborn up to the age of 12.

All children can wear all the colors of the rainbow: for Villervalla you can play with the mix and match (mix and match), both with monochromatic colors and with cheerful and playful all-over prints, while the fit adapts to boys and girls, always remaining comfortable.

For Villervalla, as for many Scandinavian brands for children who first made organic a lifestyle and one of the values behind the brand, it is very important that the garments are free of harmful chemicals. Most villervalla garments are in fact made with organic cotton and Oeko-Tex certified.

Villervalla’s CEO and founder, Hanna Håkansson, opened a children’s shop in 1999 and quickly realized that it lacked well-designed unisex clothing that worked well for everyday use but also for special occasions. Villervalla’s basic idea was born and Hanna launched her first collection in 2005. 16 years later, Villervalla operates seven concept stores, has about 50 retailers in Sweden and more than 150 retailers in 20 different countries around the world.
In 2010, 2011, 2012 and 2013 Villervalla received the prestigious Gazell award from Dagen’s Industrie. Hanna also received the Ernst &Young “Emerging Female Entrepreneur in the Western Region of Sweden” award in 2011 and the Veckans Affärer “Årets Superföretag” (Super-company of the year) award 2014.

Villervalla is based in the picturesque old part of Gothenburg called Haga. Here you will find a design/product development studio, the administrative office, a concept store and an outlet. The other concept stores, all in Sweden, are located in Gothenburg, Stockholm, Malmö, Alingsås and Karlshamn.

Scandinavian brands for children: Villervalla and its commitment to sustainability at 360 degrees

For Villervalla it is important that the clothes are not only beautiful and comfortable, but also made with the greeting of children and the environment in mind: since 2005, extensive tests have been carried out on all products through an independent testing company to ensure that no toxic substances are present. All products from Turkish suppliers are Oeko-Tex certified® Standard 100.

The main part of the Villervalla collection is made with organic cotton. This cotton is grown without pesticides or chemical additives: thus a cotton is born free of toxic, heavy metals and genetically modified organisms. Remember that in order to be able to label a garment as organic, the production process must also be completely free of harmful substances.

Chinese and Indian suppliers are BCSI certified and the Turkish supplier follows the Sedex code:these different certifications ensure that factories use ethical business practices when it comes to the well-being and safety of their employees, as well as offering reasonable working hours and wages.

Villervalla also has a social commitment: villervalla clothes are donated through Litauenhjälpen in Olofström and Great Andoh International School in Ghana. Great Andoh is a school and orphanage run by Sweden and Ghana for children aged 1 to 18, founded by Emelie Kanter of Gothenburg. They also sponsor a project called Läs för barn (Read to children) in which they donate books to preschoolers.

In the concept stores they sell Hjärtegryn postcards, with donations for children with heart problems. Hjärtegryn is a non-profit organization founded in 2009 by Helena Någård, mother of a child born with a heart defect. The proceeds from the sale of the postcards go to the children’s and youth hospital in Lund, one of only two hospitals in Sweden where operations are performed on children with heart problems. The children drawn on the postcards were created by the designer and illustrator Johanna Lundqvist. 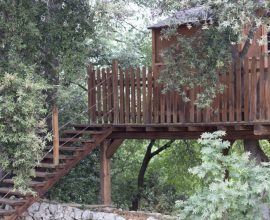