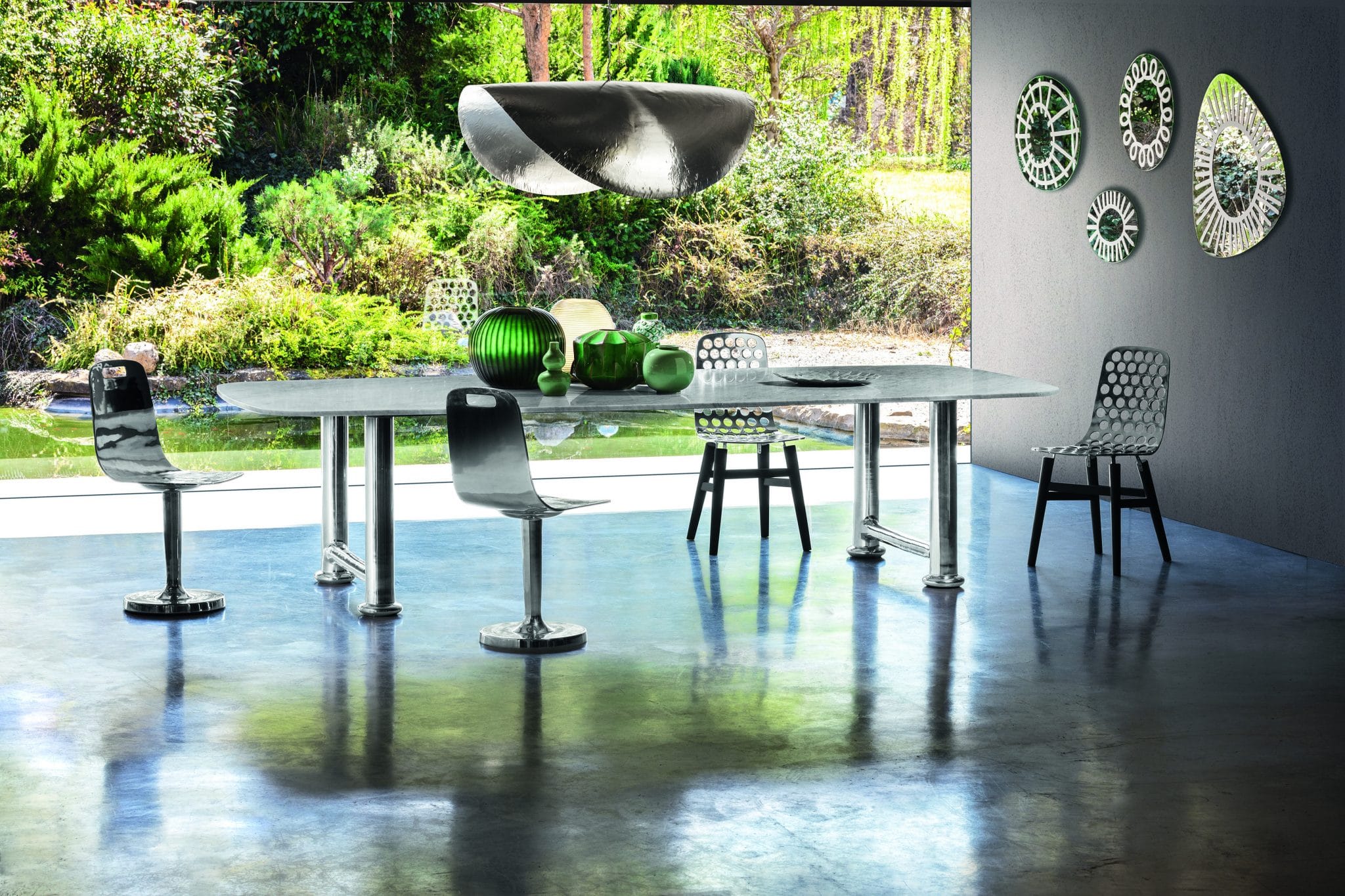 It is under the sign of Leonardo that 58th edition of the Salone del Mobile is born.

Over 205,000 sqm of exhibition area and 2,418 exhibitors of which about 550 the designers of SaloneSatellite – with a 34% of foreign companies (excluding the SaloneSatellite).

The International Furniture Fair with the international furnishing and workplace complement show has hosted more than 1,300 exhibitors, 30% of which are foreign, for 149,500 sqm divided into 3 stylistic typologies: Design, xLux and classic. Euroluce has hosted 449 exhibitors of which 49.5% overseas on over 38,200 sqm. S. Project has instead received 87 exhibitors of which 43% abroad on almost 14,000 sq. m. SaloneSatellite has been able to count on 550 designers and new graduates of international design schools on 3,000 sqm.

The International Furniture Fair and the international furnishing complement show offer numerous and variegated aesthetic paths, where the protagonist is an increasingly innovative product capable of responding adequately to the transformations of Contemporary social structure, to the consequent rapid change of the furnishing market and to the individual needs of each client.

The attempt, derived from the increasingly pressing needs of the market, must be noted to define “universal furnishings”. Lema, with the minimum sign of the console “Ella” by David López Quincoces, in the stylistic purity of its designer, tells the attention to detail of the company of risers Brianza.

In a re-reading of the extraordinary tradition of Danish furniture, the armchair “Kay Lounge” designed by Jean-Marie Massaud for Poliform. A simple steel architectural structure, offering three refined finishes: leather with sharp edges, leather or pony. Kay Lounge is an armchair that stands out in every context, from the most classic to the most avant-garde.

On the same wavelength is presented also the sofa “Trigono” by Michele De Lucchi Alias. Her couch is a concentration of knowledge and arts. The manufacturing component is interpreted by the wooden structure in sight, the technological one with the refined experimentation on the themes of lightness and resistance, the artistic one with an emotional experience arising from an astonishing form.

The theme of the real re-edition, that is the path of excavation inside the archives looking for forgotten pieces, continues its race as an absolutely dominant trend: particularly significant research conducted by Carl Hansen & Son who has led to the recovery of the iconic CH30 chair, designed by Hans J. Wegner in 1954, and the “Contour” Armchair (1949) by Børge Mogensen, characterised by a peculiar combination of solid wood and curved plywood.

Among the novelties of this salon is the neo-primitive where luxury is combined with the myth of the Primigenia cave. Transversal movement, it uses stones of origin and particular texture (axe, veins, brecciate), rough and heavy woods, woven yarn by hand (like tricoté), cement coloured with pigments and finished with wax.

Paola Navone proposes, instead, with Gervasoni, a classic chair with continuous back drilled (“Next”), made in cast aluminium, technique usually employed in sculpture or for small components. Structure in walnut or beech, seat and backrest upholstered in polyurethane foam. Cover with removable cover with seam size and sewing and free bottom.

The outdoor becomes a new status symbol: If the size of the interior furniture does not appear in strong increase, undoubtedly launched is the outdoor sector. Giorgetti, relies on the couple Palomba Serafini, who quotes the divine Eileen Gray in the articulated supports of the collection “Break”. A piece rich in quotes that brings home comfort in the open spaces.

Euroluce 2019: All About Lighting

Euroluce, at its 30th appointment with a record edition, brings on stage an integrated and intelligent lighting, to illuminate, but also to “feel” and “live” the space. The technological development, the evolution of the control systems and the miniaturisation of the springs have opened new possibilities. In this edition, the key words are experimentation and technological innovation, sustainability and aesthetic research.

For example, the distinction between a decorative light, a sculptural and artistic matrix (the installation is the Apotheosis), and an architectural illumination that takes care, almost without appearing, of the quality of the rooms, appears increasingly evident. The first line of research, destined to the decorative light, is the one that finds more space in the pavilions of the Milan fair.

Particular the strongly symbolic dimension adopted by Andrea Anastasio in his new lamp (“Mother”) for Foscarini, hollow and host form, to suggest the metaphor of a light in the womb.

“Mother is the point of arrival of a reflection on light: her role and her essence. The shape alludes to the broad flanks of the mother goddesses, the deities that protected the fertility of the Earth. But also to the vase as a container of life, because it is born to welcome the food before the flowers. ” Andrea Anastasio

We must not, however, think that the wave caused by the research on the new applications of LED sources has already been exhausted. The miniaturisation of the springs leads, in fact, to construct formally minimal objects which, however, reach a remarkable (and rendered) luminous suggestion.

To the quality of light, “Hush” by Massimo Farinatti for Martinelli Luce, adds an increased comfort for the adoption of integrated sound absorbing panels.

Hush is the new Light & sound system designed for quality of life in working environments and shared spaces. Hush combines functionality and design in a modular system of pendant modules with direct and indirect LED light source, integrated with sound absorbing panels made with Snowsound technology © (design by Caimi Brevetti) in various colours, which make Hush Perfect to furnish every room.

Solving (a real “egg of Columbus”) of ancient problems of distribution of the ceiling light finally the “Tube” system (in English, from the Metro network) designed by Ichiro Iwasaki for Vibia: a network of splicable pipes that leads everywhere the light to Starting from a single electrical connection point. TUBE proposes an unprecedented landscape of diffusers and light ducts, a plot of urban connotations that combines aesthetic balance and maximum functionality.

“The system transports the light fluidly and extends horizontally and vertically, at different heights.” Ichiro Iwasaki

The Milan Design Week has been established for a long time as an important event in the design sector. If the historical nucleus finds its size in the pavilions of Rho Fiera, year after year, the Fuorisalone takes the city to become more and more the theatre of a multitude of innovative and avant-garde events. The scenario sees the themes of art, fashion, technology and mobility repeatedly intertwines.

After being the most admired bike of the international salons of Cologne and Milan and having made a lot of talk about himself also during the Sanremo Festival, Suzuki KATANA comes back to the center of the spotlight. The icon of Hamamatsu’s two-wheeled range prepares, in fact, for a double presence within the Milan Design Week.

Italdesign, present for the first time in the context of Fuorisalone, makes it accessible to visitors the showroom to observe closely a selection of objects designed and designed by the Industrial division: the new professional machine for coffee Espresso FaemaE71E, the Okamura office chair so far and the Oxolodge Oxology Glitch table, made from a petrified tree over ten thousand years ago.

Honda inaugurated its presence at Design Week in Milan, the biggest design event in the world, where the Japanese House participates for the first time. At the heart of the Experience “Honda-Casa connected Tortona” There will be Honda e-Prototype, premiered worldwide only a few weeks ago at the Geneva Motor Show. In the Tortona district, a Milanese design icon, Honda has given life to its experience within an unprecedented space, represented by the high fashion boutique Alysi Garden House.

Novartis chooses design Week to make “culture on migraine”, generate social awareness and propose concrete solutions with a project that invites the public to reflect, with a specific focus on how design can improve the management of the disease In the workplace.

A special edition of the Invictus GT280 is the protagonist of the event show IN-OUT, which for the second year conquers the squares of the modern CityLife district of Milan, one of the new pulsating hearts of the city, during the fuorisalone of the Design Week.

The founder and best seller of the Invictus Yacht production comes back with a new and peculiar “blue Milan” colour, which enhances its “semi-upside” bow. Sharp and solid at the same time, it develops in sides without frills and worked ad hoc, with transitions between the full and the gaps very homogeneous, except the windows in the cabin area and the engine air intakes, made in the shape of simple cracks that Emphasize the monolithic characters desired by Christian Grande.

While young people around the world are mobilizing environmental issues, the European Institute of Design takes to the field an International project on the great theme of sustainability that involved students from the eleven locations of Network between IED Italy, Spain and Brazil.

The appointment with the mobility of the future for institutions, companies and citizens goes from the streets around Porta Venezia, where will be held the first edition of BluE, event dedicated to the mobility of the future. BMW is told through installations, workshops, talk and zero emission test drives. National preview shows the concept BMW iX3, the first electric SAV of BMW whose launch is expected in 2020.